Xu started playing the piano at age of 10 but had barely made any recognizable progress before he was abandoned by his piano tutor. Ironically, that was the moment when he developed his zeal for music and soon embarked on a journey in the world of sound. The trigger of his interest was the ballet music by Bizet and Tchaikovsky, the colorful orchestral soundscape of which deelply impressed him and established his favor in majestic orchestrations rather than solo piano. He began to study music history and theory, trying to understand how such wonderful music is composed. Meanwhile, he continued his piano playing by self teaching. It was not long before he was struck by another milestone in the music history, Le Sacre du Printemps, which introduced him to a entirely new world of sound, as it did to everyone else a century ago. To him, the new world sounded more appealing than challenging. With an open mind, he spent a huge amount of time exploiting the theories and analyses of contemporary music, and found himself landed in the realm of "new music" quite comfortably. The unusual exposure to modern composition techniques eventually ignited his desire to write his own music.
In college Xu continued his self education and practice in music while he took physics as his major. On the physical level, music is vibrations and acoustic waves, and it has its own nature and character as every other physical entity does. The backbone of a muscial composition - its materials, its structure and the mode it develops - bears remarkable ressemblance to many other physical processes. Xu, as a physicst, explores an elusive face of music that is not easily accessible by every musician.

Grew up in Nanjing, China,  Xu was an pianist dedicated to promoting contemporay music in his community. In Nanjing University, he performed works by many notable contemporary composers, such as, Messiaen, Boulez, Cowell, Lachenmann, most of which were premieres on the local stage.  During his graduate study in University of Colorado at Boulder, USA, Xu performed Stockhausen's Klavierstücke IX in the music college and his "Variations on the Song of Yantze River" at the Chinese New Year Gala 2014. His cello quartet Si I (2011) has been published by Skinny Dip Publications. Highlights of his portfolio are a violin concerto entitled "Cat", three piano concertos and a quintet for oriental instruments.
Contact: xaviersx.phy@gmail.com 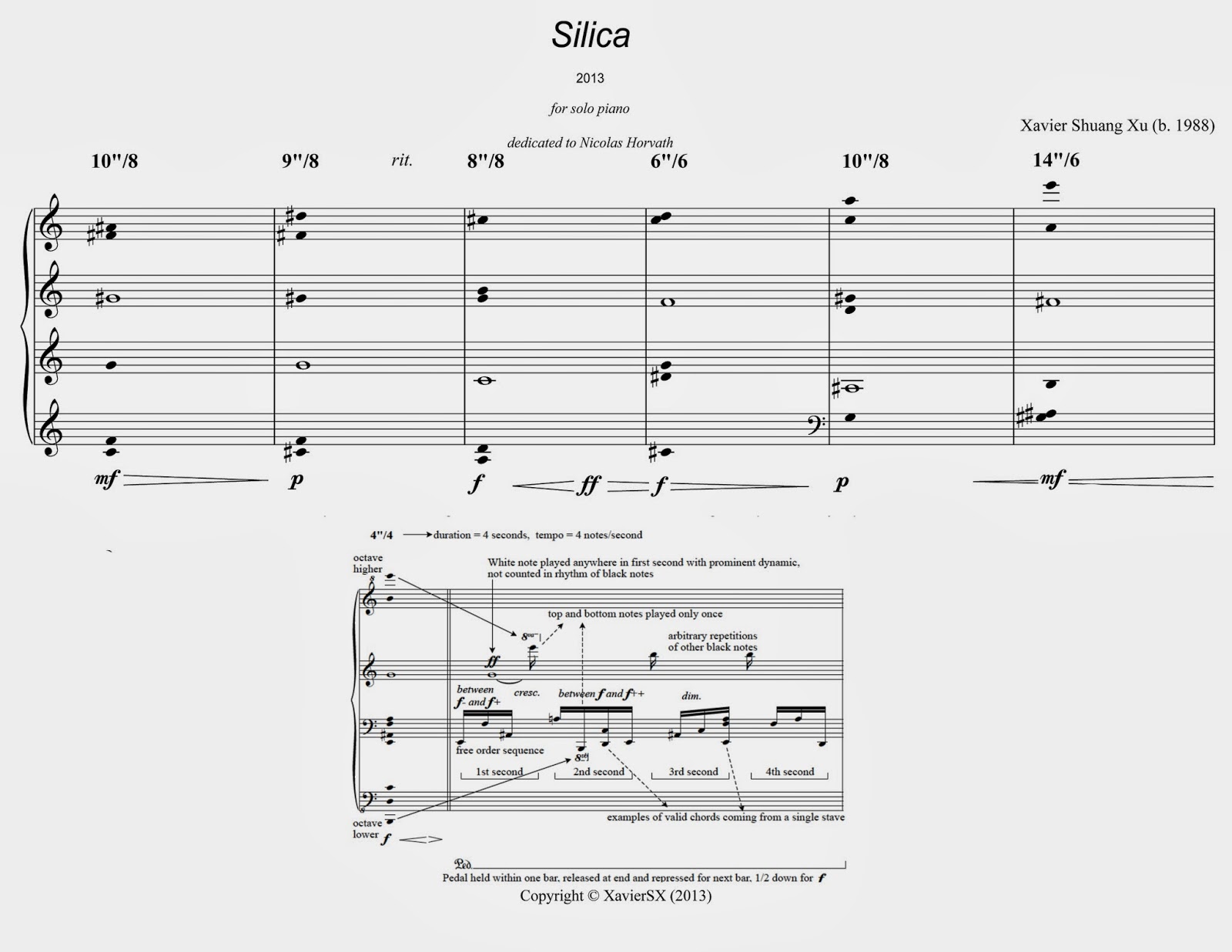 Silica (2013), for solo piano is in homage of Philip Glass and dedicated to Nicolas Horvath, who will give its premiere in his wondrous project - “the Glass Marathon”.
The name Philip Glass reminds me of not only the mesmerizing and fascinating landscape of music the composer has created, but also something scientific, and I am not talking about the opera storying Einstein or the symphony of plutonium or the soundtrack for sci-fi movies. I am talking about the material "glass". Glass is the common name for a variety of materials based on silicon oxide, or silica, one of the most stable and the most abundant compounds. It has found a wide spectrum of applications. It can be fragile kitchenware as well as ultrastrong shields in battlefields. Silica has intriguing physical properties and it is very complex. It has many distinct crystal structures (polymorphs) though the chemical composition is the same and the metamorphism has been a hot topic in physics community.
Enough for the science. A musical representation of all these interesting aspects has been hovering in my mind for a long time. I appricate Nicolas offering me this great chance to realize some of my best ideas. The whole composition is based on a hexatone pitch class set 6-9 [012357]. It starts from close voicing in the middle of the piano register and spreads out to the entire keyboard, as if a highly condensed phase being heated and molten. The underlying motifs are the melodic lines in each of the three voices: the emphasized notes (white notes, see Instructions), the top and the bottom. A pitch set is presented both vertically in one bar and horizontally in every six bars as a cycle, in which each element of the pitch set gets to be emphasized once. To advance with the progression pattern, the original pitch set needs to be transformed at times, thus new tones are introduced but the tonal structure remains the same. After six cycles, all of the six initial sets in the first cycle have been transformed and thereby all twelve base positions of the pitch class have been exhausted. The metamorphosis of the music elements is metaphorical of that of silica and the cycles imply the different phases of the crystal.
Publié par Nicolas Horvath à 14:44