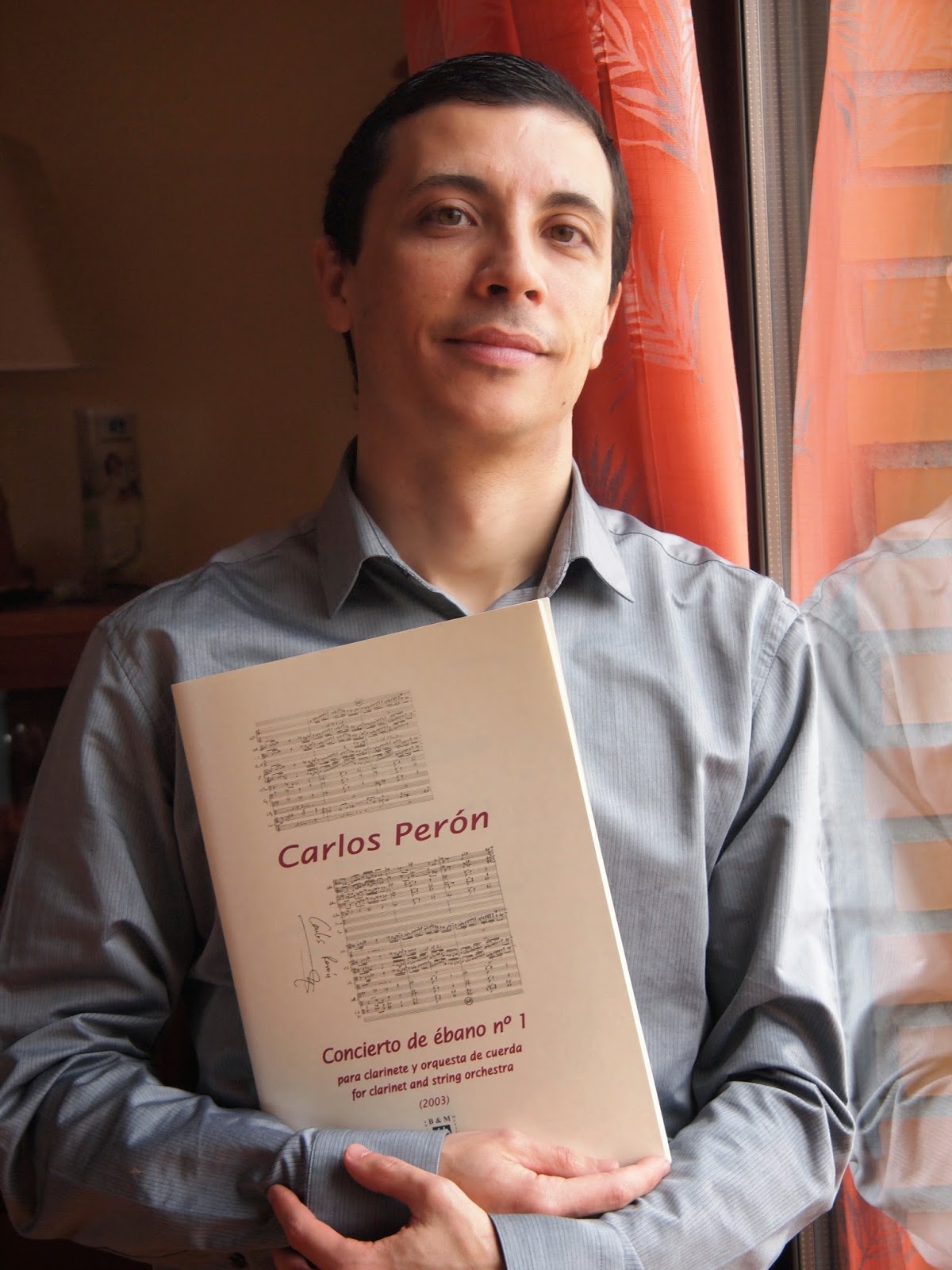 Carlos Peron Cano﻿
Born in 1976 in Madrid. He began his music studies at the age of 10 years with the professor Manuel del Real and continues his studies with professors as Adriana Marchinkova, Ana Baget, Manuel Guillén and Hermes Kriales. He finished international courses with masters as Vartan Manoogian, Agustín León Ara, Ara Malikian, Lorand Fenyves, Ch. Bruggemann, Arcadi Futer, Oleg Lev, Liang Chai, Volkmar Holz, Boris Kuniev and Alexander Detisov. In the area of composition he has participated in courses given by Mauricio Kagel and Enrique Blanco (teacher of harmony), and also taken part in conferences given by masters as G. Ligeti, E. Fubini, K. Penderecki, Luis de Pablo, K. Stockhausen, Klaus Huber, H.W. Henze and Claudia Colombatti.
He is the concertmaster of the String Octet of Madrid and he has been conductor of the choirs "Amadeo Vives" (2001-2002) and "Federico Chueca" of the township Madrid (2002-2003). He has also been maestro of the chamber orchestra "Jóvenes Virtuosos" of the township Madrid, which among others plays in the Monumental Theatre of Madrid, in the Palau de la Música of Barcelona and in the Auditorium Joaquín Rodrigo (Madrid). He has also been invited as concert-master of the String orchestra "Arpista Ludovico" in the 6th International Harp Contest "Arpista Ludovico" in San Lorenzo de El Escorial (Madrid, 2009). Moreover, he dedicates himself to the world of composition as a member of the SGAE (Sociedad General de Autores y Editores, General Association for Authors and Publishers) and has 481 opus and more than 50 first performances in his production.
He has premiered his workpieces with orchestras and groups as the Torino Philharmonic Orchestra (Italy), the Opera Symphony Orchestra from San Sebastián de los Reyes (Madrid), the string orchestra "Jóvenes Virtuosos" of the township Madrid, the orchestra of the Autonomic University from Madrid, the chamber orchestra "Joaquín Turina" (Madrid), the Project Guerrero, the Plural Ensemble, 2i2 Trombone quartet, Terpsicore guitar quartet and the duo "Alio modo" (accordion and vcello), such as with the choral of the University from Murcia (International Festival of Young Orchestras 2002) premiered and conducted, and Duo Bartok (two violins).
He has collaborated with masters as Filippo Maria Bressan, Ananda Sukarlan, Fabian Panisello, María Rosa Calvo-Manzano, Ángel Luis Castaño, Iagoba Fanlo, Serjoud Kradjian, Joaquín Clerch, Pavel Crisan, Breno Ambrosini, Paul Meyer, Jose Luis Temes, Ros Marbà, Odón Alonso and Ara Malikian. His works have been played and premiered in Mexico, France, Malaisia, Italy, Perú, England, Germany, Austria (Aspekte Festival) and in Turkey (XIX International Musikfestival of Ankara) such as in Spain (Ávila, Segovia, Sigüenza, Palencia, Sevilla, Granada, Barcelona, Murcia and in the township of Madrid - National Auditorium).
His works has also been recorded for the National broadcast from Spain (RNE) and for the Spanish TV (TV2). His music is published in the publishing house Periferia Music Publisher, Starborn Books (UK), Lighthouse Music Publications (Canada), Really Good Music Publisher, LLC. (USA), Dorn Publications, Inc. (USA), Beurskens Music Editions (Netherlands), Music Editions Bayard-Nizet (Belgique), Brotons & Mercadal Ed. Musicals (Spain) and Arte Tripharia Publisher (Spain). In the year 2000 five of his opus have been nominated for the prices of the SGAE and he has been signalized in the competition of Young Composers of the CDMC (Centre for the distribution of contemporary music, 2005).
He has written articles and also given an interview for the music magazine "Mundo Clásico" such as collaborated as music and image consultant with the company Globomedia SA, for Antena 3 (TV) and he has participated in the National Radio of Spain programme "Gathering" with the composers Luis de Pablo and David del Puerto. He has studied composition with the Madrid composer David del Puerto and also collaborated with the composer Jesús Rueda and Joan Valent. With Joan Valent he has performed an orchestra elaboration of a folk play for the Philharmonic Orchestra of Gran Canaria (2002). He is the author of the soundtrack of Spanish films "Cornerstone" and "Guest" 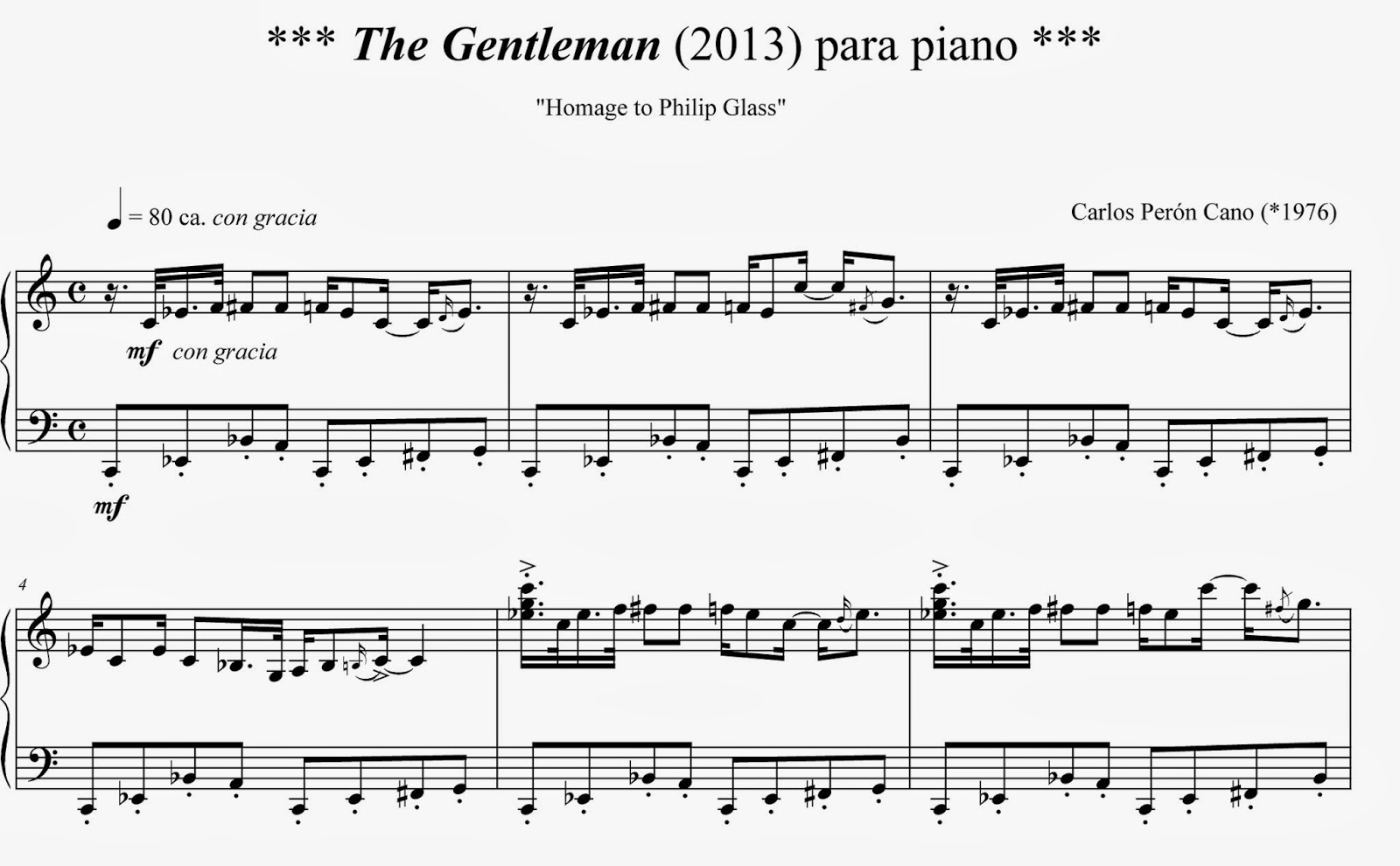 "The Gentleman" work composed in 2013 and dedicated to Philip Glass is written in the style of the blues and its structure is ABA. The piece begins with a fun and gentile theme accompanied by a suggestive low, and then gives way to a central calm and dreamy with a wistful melody and sweet, and then recap and finish so happy and fun. The work lasts about 4 minutes and is published in the German publishing Noten Roehr Music Publisher (Frankfurt)
Publié par Nicolas Horvath à 14:14